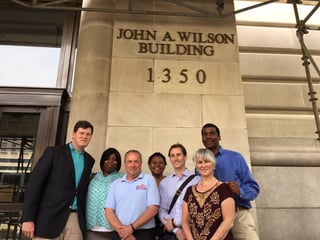 I live in a community where we know each other by name, use Twitter to help each other's locate lost pets, and shovel each other’s sidewalks after storms. I feel blessed to have such a close-knit environment while still living in a large, often impersonal city like DC. I am passionate about my community, so I serve on a nonprofit board.

My organization is a small, young nonprofit devoted to supporting small business and community development for the major street that runs through my neighborhood. When our board sat down to discuss upcoming priorities for the neighborhood, we knew that expanded mass transit was at the top of our list. Lots of DC residents don’t, or prefer not to, drive. Many of my neighborhood’s businesses are at the top of a steep hill, and people from other communities on the same street have been telling us that they don’t want to bike or walk up the hill, and there is no bus that goes from their neighborhoods to ours. When we discovered that our transit agency had already done a feasibility study on a bus line that would address the issue, we knew that it was time to visit city councilmembers.  We needed 1.5 million dollars to fund the bus line for the first year. Many of us had never asked anyone for even half that amount of money. Still, we knew that this bus had the potential to unite our section of the city and make a substantial difference in the life of our small businesses.

It was our first advocacy project as a board, and we were understandably nervous. Aside from our executive director, no one on the board had much experience with advocacy, and we weren’t sure how things were going to go. Here are the nine key takeaways from our process. We are planning to apply them to our next effort, and I’m sure they will be of help to you.

A few days after the annual meeting we got word that the city would fund the bus line. This success has led board members to strategize about future endeavors, and created energy in the boardroom among new and seasoned board members alike. We can’t wait to apply these nine takeaways to our next advocacy project.

Do you have an advocacy success story?  Please share your takeaways with us here.

Topics: The Board’s Role in Advocacy, Stand for Your Mission