Leading with Intent Comes of Age: A glimpse at what 21 years of change in nonprofit governance looks like 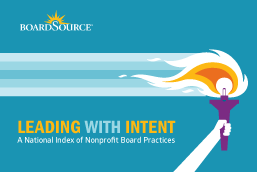 In 1994, Amazon was launched, the infamous Lorena Bobbitt went on trial and was found temporarily insane, Michael Jackson married Elvis’s daughter, and Howard Stern ran for governor of New York. Given such momentous cultural milestones, it is hardly surprising that the first-ever BoardSource “Governance Index” —later renamed Leading with Intent —did not make the popular headlines. But now that Leading with Intent has reached maturity some 21 years later, what does a comparison of the survey results between 1994 and the most recent survey (conducted in 2014 and published in early 2015) tell us about the evolution of nonprofit governance over time? What are the changes and trends they indicate? Which conditions have stubbornly persisted? And, most importantly, what’s left to do?

Answers to these questions must be prefaced with the caveat that the Leading with Intent survey does not contain a constant sample of respondents in both years. The participating organizations, their chief executives, and the individuals on their boards  have changed over time, as have the mission types and sizes of organizations in the survey case mix. The individual survey questions have changed too, reflecting the rise of new issues in the interim, and the insertion of more detailed questions about the continuing topics of interest. The 1994 survey did not contain any questions on chief executive gender or performance, or on board culture, dynamics and performance, for example. Some questions were asked about a topic in both years’ surveys, but employed different words, scopes, and definitions in doing so, making some potential comparisons over time difficult.

But the 1994 and 2015 reports  do offer us snapshots in time of nonprofit governance through the eyes of about 1,200 respondents in each year — two groups that are reasonably representative of the larger nonprofit communities of their day. So even these “family albums” can show contrasts that help us remember how we were — and make us think about what we have yet to become.

Back in 1994, 95 percent of organizations that participated in the survey were 501(c)3s. By 2015, only 79 percent were traditional “public charities,” reflecting a rise in professional societies and trade associations in the mix.

The budget size of participating organizations has grown. In 1994, 55 percent of organizations had under a million dollars in annual revenue; only 37 percent are in that bracket today. Meanwhile, the share of participants with $10 million or more in annual revenues has gone from 10 percent in 1994 to 14 percent in the recent survey. This enlargement probably reflects more the general growth in the economy (GDP rose 135 percent between 1994 and 2014) than any shift towards “richer” survey participants. But to the extent that it might be showing that smaller organizations are more “adrift,” this change suggests a need to develop more — and less costly —- ways of serving that group.

Board structure and practice

Board structure and practice have definitely changed. In 1994, there was an average of 19 members on a board; by 2015, this was down to 15. In 1994, 9 percent of CEOs were voting members of their board; this had risen to 12 percent in the more recent survey.

The number of board meetings has declined: In 1994, nearly half of all boards were meeting more than 10 times a year, compared to only one-third of boards meeting that frequently today. In 1994, 13 percent of all boards had meetings typically lasting more than four hours, compared to 8 percent today. Perhaps the timing changes may be what has encouraged the greater participation found with boards today: In 1994, only 71 percent of boards reported attendance by the majority of their members at board meetings, compared to a full 100 percent today.

Board member terms have shifted to shorter lengths: In 1994. Only 2 percent of organizations had one-year board terms; this grew to 3 percent by 2015 as the share of organizations with two-year and three-year terms shrank, from 22 percent to 16 percent and from 71 percent to 63 percent, respectively.

The share of boards not doing a formal assessment of their own performance has fallen from 77 percent in 1994 to just 29 percent recently.

So overall, on the basis of two non-continuous samples and two partially non-aligned question sets, it appears that board work has evolved to a more modern style of management, with greater turnover and shorter board careers for individual members, who now participate in fewer and shorter meetings and on fewer committees. With fewer informal learning opportunities, these changes suggest the need for more formal and faster board professional development opportunities.

Diversity of board representation, though, seems more of a sticking point for change. The percentage of white CEOs in 1994 was 86 percent; that has declined to 79.5 percent today.  The gender balance on boards has changed: the ratio of males to females was 54 percent to 46 percent in 1994, compared to 52 percent to 48 percent today. Most minority racial groups have also made slight gains in board representation since 1994, but African-Americans only marginally so. Asian-Americans have risen from 1 percent to 3.2 percent of board members, and Hispanics from 3 percent to 4.7 percent, but the share of African-Americans on boards has risen by just 0.9 percent. Given the growth in minority shares of the population as a whole, it is possible that board racial representation has even slipped backwards, relatively speaking. [1] At a time of increasing polarization of society and increasing economic inequality, this raises the question of whether boards may be becoming even less representative of the challenges faced by their organizations and by the people they serve.

The lesson of comparing these two snapshots in time seems to be that board business practices have proven easier to change than board composition. It will clearly take more focused action on increasing diversity than has been the case up to now to show more progress on that front in the LWI’s next 21 years.

[1]   It is not possible to make more direct comparisons between board representation and the share of different racial groups in the U.S. population as a whole because of differences between the race questions asked by BoardSource and the U.S.  Census. These questions will be brought into alignment beginning with the 2016 LWI.

BoardSource opened the 2016 Leading with Intent survey today. All nonprofit CEOs/executive directors and board chairs are invited to participate.