What to Do — and Not Do — When Your Chief Executive Leaves

BoardSource is excited to announce that we just published the second edition of Chief Executive Transitions: How to Hire and Support a Nonprofit CEO. The author, Don Tebbe, shares some of his expertise on this topic with us here.

Nearly every board faces the challenge of hiring a new chief executive at some point. And when it comes to managing the CEO transition, every board seems to remember that terse line in the bylaws. You know — the one that reads, “the board is responsible for hiring and supervising the chief executive.” Unfortunately, that directive is terribly short advice. It doesn’t come close to addressing the board’s full responsibility for managing CEO turnover.

CEO transitions are complicated, but managing them well is easier than you think. This post outlines the board’s six tasks for managing the transition the right way. But before we talk about what to do, let’s cover what not to do.

The first common mistake is seeing the transition only as a hiring problem. In reality, hiring the new chief executive is a part of a much larger transition process. It’s a process that involves more changes than who occupies the chief executive position. Ignoring this larger process means you’re ignoring a lot of the related changes and risks — leaving them to chance rather than being intentionally managed.

The second common mistake is rushing through the process. When boards discover that their executive is planning to leave, many rush to fill the position as soon as possible.

The pressure to jump in the search mode is understandable. Hiring a new chief executive is among the board’s biggest responsibilities. And, it’s foreign territory for nearly every board. Faced with complexity and the threat of the unfamiliar, the board is experiencing a form of pain. And we all want the pain to go away as quickly as possible.

But rushing leads to cutting corners and skipping over aspects of the transition that can yield big dividends. A CEO transition is an opportunity to level up an organization’s game plan and capabilities, not just manage the potential downsides.

Now, let’s take a look at those six tasks.

1. Understand and guide the transition.

Regardless of whether the executive has already left or the departure date is off in the future, the board’s first task is to embrace the entirety of the transition process. To do that, the board should

A variety of factors influence the nature and dynamics of the transition; thus they shape the board’s process management job. There are organizational-related factors, such as size, complexity, operating condition, and future prospects. And, executive-related factors, such as the departure circumstances, how long the executive has been in place, their impact on the organization and so forth.

It’s critical for the board to understand the scope, nature, and dynamics of the circumstances surrounding the transition. And then take those factors into account as it prepares for and guides the leadership change process.

2.  Prepare for a leadership change.

Preparing for leadership change is all about “readiness” — making sure that the organization, the job, and the team are ready.

How to handle leadership continuity depends a lot on the current executive’s departure circumstances. Specifically, whether they are leaving before the new executive is hired or if they’ll be sticking around for the entire transition process and will be there to hand off the organization to their successor.

If the incumbent is leaving before the successor is hired, the board should appoint an appropriate acting executive or hire an external interim CEO. Appointing a temporary bridge leader will give the board the time and breathing room it needs to carry out the transition process. Trying to forestall a leadership gap by rushing through is never an effective strategy.

Of course, if the incumbent is being fired or there’s an otherwise messy departure, the board needs a really skilled interim executive who can help them stabilize the organization.

On the other hand, if the departing executive will be in place for the duration of the transition, there are three things the board should do.

Second, plan for some overlap of the executives so there can be a proper handoff. The overlap can range from a few hours to a few days depending on the complexities of the job and the organization. The board should take this into account in budgeting and transition planning.

Third, clarify whether the incumbent will have an ongoing role with the organization. Any ongoing involvement should be approached with a great deal of caution. And the board should disclose any proposed arrangements to candidates during the interview process. Also, the board should make it clear that the new executive has control over any proposed contract or employment arrangement. In other words, it shouldn’t saddle the new executive with promises the board makes but the new executive is expected to keep. And, don’t put the departing executive on the board. (These hedging attempts are almost always a bad idea.)

4. Manage communications (and ensure positive closure with your current executive).

Good communications play an essential role in the success of the transition. This includes how the departure announcement is handled, how the successor’s appointment is announced, and how frequently the stakeholders are updated throughout the process. Communications — good or poor — have an impact on the organization’s stakeholders. And, they are a reflection of the board’s professionalism in handling the transition.

Key stakeholders, such as major funders, will want to hear about the transition firsthand. Letting them hear about it through the grapevine is a huge faux pas. Staff should be kept appropriately updated as the transition progresses. And, all may need some reassurance if the departing executive is leaving “big shoes,” or if the departure circumstances were rocky.

Coming to positive closure with the current executive is an often-overlooked aspect of the communications process. This includes how the board handles the departure and the sendoff that they give the exiting executive. Both say a lot about the board and can reflect positively or poorly on the organization.

5. Search for, select, and hire the new CEO.

Of course, the search for a successor and the process of hiring a new CEO are central to the transition process. The board will need a good plan for developing the candidate pool — also, a plan for screening candidates and conducting the interviews. And be clear about how the final selection is going to be made and who’s going to seal the deal with the new executive.

As part of the planning for this task, the board should

6. Onboard and support the new executive.

Many boards think the transition is over once the appointment has been made. But for the new executive, the transition is just beginning. Onboarding and supporting the new CEO is a critical part of the process. And attention and energy in this phase can leverage the investment the board made during all the previous stages.

Onboarding means making sure that the new chief executive

Being “new” has a short shelf life. The golden time of onboarding is the first 90 to 100 days of the new executive’s tenure. This early stage of tenure is all about learning and building critical relationships.

The departing executive should make sure that there are handoff and ramp-up plans for the successor. And the plans are customized with input from the new executive.

The board should initiate an intentional process to forge a powerful partnership with the new executive. Together they should clarify the following:

The board and executive form two sides of the most critical relationship in the organization. The greater the clarity and mutual understanding you can introduce into this relationship, the stronger your organization will be. 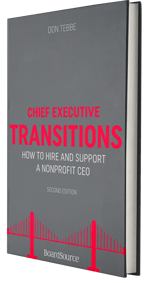 Embracing these six tasks doesn’t add significantly to the time commitment, but it enormously increases the odds of a successful outcome. The slight additional investment of time will pay huge dividends in strengthening the organization. And, a thorough process helps avoid the risk of a failed transition and the painful prospect of having to redo the entire exercise in a few months.

Don Tebbe will be taking over the BoardSource Twitter on April 2 from 1:00-2:00 EDT to answer all of your questions on CEO transitions. Be sure to follow BoardSource and use the hashtag #TebbeTakeover.

And for detailed, step-by-step advice on each of the tasks noted above, plus tools and many helpful templates, see Chief Executive Transitions: How to Hire and Support a Nonprofit CEO, Second Edition, now available from BoardSource.