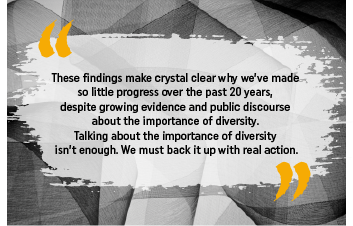 Earlier today, BoardSource released Leading with Intent, our biennial study of nonprofit board composition, culture, and performance. The study reveals much about what’s happening within nonprofit boards today. And while there are some encouraging trends worth highlighting — most notably a significant expansion of board engagement in advocacy — the study also laid bare some disturbing truths about board attitudes and actions regarding racial diversity.

To see such meager progress over a more than 20-year period is not just disappointing, it’s dangerous.

That’s because — when it comes to nonprofit boards — diversity is about much more than having a “good mix” of people on the board. And it’s about more than the well-documented benefits of diversity to innovation, problem-solving, and financial performance.

In the social sector, a board that lacks racial and ethnic diversity risks a dangerous deficit in understanding on issues of critical importance to the organization’s work and the people it serves. As we reflected in a recent letter to the editor at The Chronicle of Philanthropy:

“BoardSource is unapologetic about our belief in the importance of board diversity, not just because we believe diverse perspectives help boards operate more effectively but because we understand the very real risks a lack of diversity can create. Homogeneous boards can fall prey to strategic blind spots in any context, but the stakes are especially high when a board is ill-equipped to understand the impact of its decisions on the communities it seeks to serve.”

Consider the impact of a board, in today’s environment, that doesn’t understand how race and racism are impacting the people that they serve. A board that is oblivious to the fear and pain that is unleashed on entire communities when white supremacists march openly and without universal condemnation. A board that struggles to understand the significance of changed policies and protections for immigrants. A board that can dismiss to “politics as usual” realities that are — for those they serve — deeply painful and destructive.

The need for a diverse board that can make decisions from a place of understanding is one that nonprofit executives themselves have identified. In Leading with Intent, chief executives report that diversity (of all kinds) is important to

As one would expect, this acknowledgement of the importance of diversity coupled with the extremely low levels of racial and ethnic diversity on boards has led to a high degree of dissatisfaction with current board composition. Leading with Intent finds that 65 percent of chief executives and 41 percent of board chairs report that they are “extremely” or “somewhat” dissatisfied with the level of racial and ethnic diversity on their board.

But perhaps most disturbing is the level of dissonance between many respondents’ attitudes and actions. Nearly one in five of all respondents — 19 percent of all of those surveyed — reported both that they are 1) dissatisfied with their board’s racial and ethnic diversity, and 2) placing low or no priority on demographics in board recruitment.

These findings make crystal clear why we’ve made so little progress over the past 20 years, despite growing evidence and public discourse about the importance of diversity. Talking about the importance of diversity isn’t enough. We must back it up with real action. If we don’t, it amounts to little more than lip service. And with the stakes so high, that’s simply not enough.

Read more about why BoardSource believes that diversity, inclusion, and equity are central to our vision of a world where every social sector has the leadership it needs to fulfill its mission and advance the public good.